The way we build a chord progression has a strong emotional and narrative power. In this article I will share some tools and formulas to assertively create a chord progression. This will help you project the emotions you want to trigger in your audience.

If you don't know what a chord is, or want to refresh your memory, you can check out our dedicated articles regarding chords, what they are, and how to build them.

What is a chord progression?

A chord progression is the sequence of chords in a song.

Usually, the chords are represented by Roman numerals, which show the relationship between two musical notes, and are relative to a scale.

A chord by itself doesn't have a narrative value, but a chord progression does and generates a particular emotional effect.

The cadence will determine how the song unfolds.

To begin with, let's talk about the chord progressions of the scales.

A scale is composed by 7 notes and the octave: I II III IV V VI VII. This means the chord progression will be composed by 7 chords. The rule is:

These images will help you visualize this:

Usually, in a song we do not use all the chords of the key. So, how can we choose the chords of our progression to trigger a particular emotion?

You can check out our article regarding how to choose the key and modes to learn which chords are linked to which emotions.

There are two important aspects in a cadence: direction (the thread and resolution) and color (the nuances).

Bear in mind that a chord progression seeks resolution, it goes somewhere. When you hear a song with no resolution or a weak resolution, you get the feeling that there is something missing, that the song is not quite finished. Which is not necessarily bad, if that's our intention. And this can cause the audience to not feel connected with your song.

Some examples of cadences with a neat resolution are:

Some examples with no resolution are:

Play these progressions and you will understand what I am talking about:

The color is the nuances in the song, it's what makes it dynamic and more interesting. There are chords that add color, that strengthen the emotion you want to project. So I suggest to add those to your cadence. The most common chords for this are:

The key is to find the right balance between color and direction, all in the service of the emotion we want to project in our song.

These are some examples of cadences that I really like:

Click in here and you will find an interesting tool that you can use to get ideas for chord progressions.

I hope this information help you understand how to choose the right cadence in your compositions.

See you in the next article, which will be the last one of the series How to project emotions through music. I will talk about modulation and how we can change the emotional effect with eloquence in a song.

If you liked this article, check out the other articles in this series: 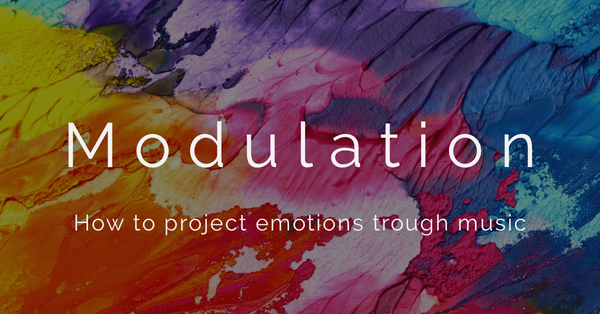 Modulation has a huge emotional power. Learn how to modulate to trigger the desired emotions in your audience.

When you are writing content with two voices sharing the same staff, Flat put the stems of one voice upward, and the stems of the other voice are facing downward. Two voices with

Flat - Blog
—
How to project emotions through music: chord progression
Share this